Miner Fan or Power Supply Fan Failed, Shall I Repair or Replace it? 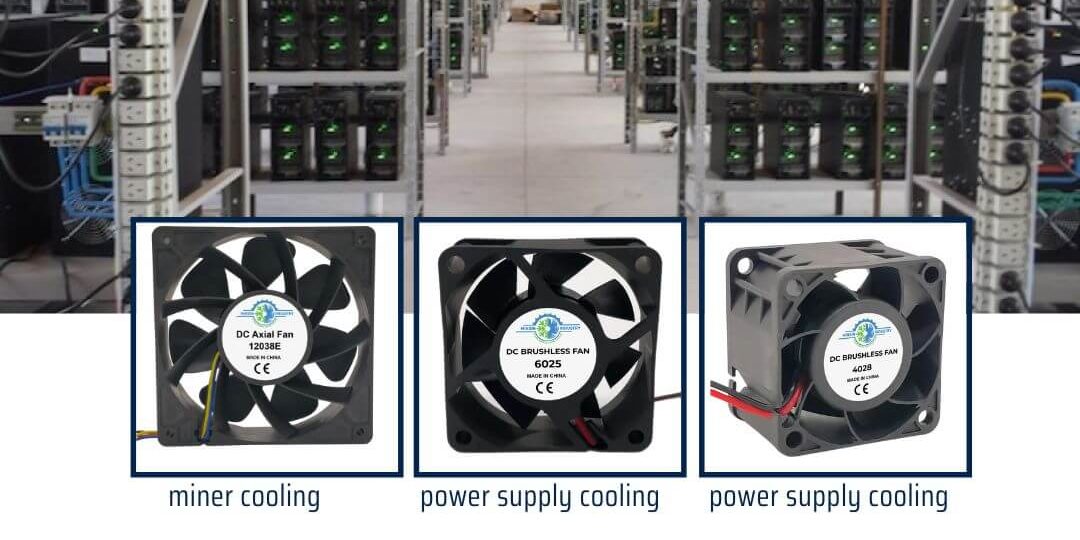 Therefore, installing and maintaining miner fans and power supply fans plays a significant role in keeping the ventilation system for miners and mining PSU running. Without the fans, it will become a disaster to the mining farm.

The miners fans and PSU fans in the mining farms operate continuously at high speed and high strength. Due to the continuous operation, the fan parts get vulnerable and the cooling fans might breakdown or cease to function properly.

Replacement of fans seems to be a quick option, but it is very costly as there are thousands of fans within a mining farm. It will cost a hefty amount to replace the damaged miner fans and power supply fans.

In the below text, we are going to discuss whether we need to repair or replace the miner fans and the power supply fans while maintaining them, the possible repair solutions, and their economic factor.

The impeller is a significant part of the cooling fan. It is used to increase the pressure and volume of air as per the requirement. There are various reasons that play a part in the failure of the impeller of a cooling fan.

One such reason is that there might be an accumulation of dust and grease. Moreover, the chances are that the impeller may have undergone an mechanical malfunction.

The remedy for the initial problem of grease and dust is to clean the blades of the impeller thoroughly. This will prevent damage from the greasing impact.

The case and magnet of the impeller can also be damaged. In most cases, impellers can be replaced easily and is a cost-effective solution as compared to the replacement of the whole cooling fan.

The fan motor is undoubtedly the most expensive part of an miner fan or PSU fan. There are three major components of a motor which are as follows:

If any of these three components is damaged, it will hamper the fan’s working. Among these materials, copper wire and PCB are more expensive. Therefore, a motor replacement is possible but is usually not preferred due to the high cost.

Instead of motor replacement, it is a more viable option to go for a fan replacement.

The motor is a vital part of the cooling fan, and unlike other parts, it is very expensive. The motor is composed of different parts, and if any part within the motor is damaged, it ceases to work.

Therefore, the replacement of a part within a fan motor assembly is not as simple as it looks. It will require a great amount of time and labor and even special machine to do this in-depth repairing. Replacing the fan will prove more beneficial in the long run.

Ball-bearing and tower spring are two components that work together to ensure the smooth functioning of the fan. The ball bearings play a significant role in the operation of the fan blades.

Similarly, the tower spring’s job is to provide sufficient pressure to the ball bearings that will keep them running. These two parts are easily replaceable and are not very costly.

Hence, you can easily replace the ball bearing and tower spring of a cooling fan if they get damaged. The replacement process is also very straightforward.

This might sound to be the easiest part to replace, but it is not the case. The body of the cooling fan is mostly made of plastic. If the fan’s body gets damaged, it can be replaced easily and is not much costly.

Extreme care must be taken during the replacement of the fan’s frame. It is because this portion of the fan is replaceable only after taking out all the other parts of the mining cooling fan.

While doing this replacement manually, the chances are high that it will damage the other parts of the fan. Consequently, you will end you with more damage than good.

However, the bitter part is that the replacement process itself is costly. It is because you have to take out all the other parts using various machines and then change the fan’s frame. Furthermore, the chances of damage to other parts are significantly higher when replacing the body of the mining cooling fan. This process requires great expertise and can damage the parts of the fan if you are dismantling it by hand.

Hence, it is advisable to follow the machine dismantling process, and in this way, the other parts of the mining cooling fan will remain safe and sound.

The mining cooling fan is a complex assembly and comprises many different parts. The operational period of fans installed in a mining farm is 24/7 without any break. Owing to this continuous operation, fans are liable to get damaged. Some parts of the fan may get damaged after some time.

You must keep the above points in mind before thinking about replacing the fan. It is economically viable to go for a repair option if any other part except the motor is damaged.

Only in the case of motor failure is it recommended to go for a fan replacement since the motor is a costly part. On the other hand, impellers, ball bearings, copper wires, tower spring, frame, PCB chip, and silicon assembly are easily replaceable. To get your hands on these replacement parts more quickly, it is better to have the model number, fan pictures, and dimension beforehand, and we will ensure that we supply the the right parts for replacement of each miner fan or PSU fan.

Centrifugal Fans Vs Axial Fans: How to Choose? 
November 5, 2022