How To Cool Solar Inverter And Make It Last Longer 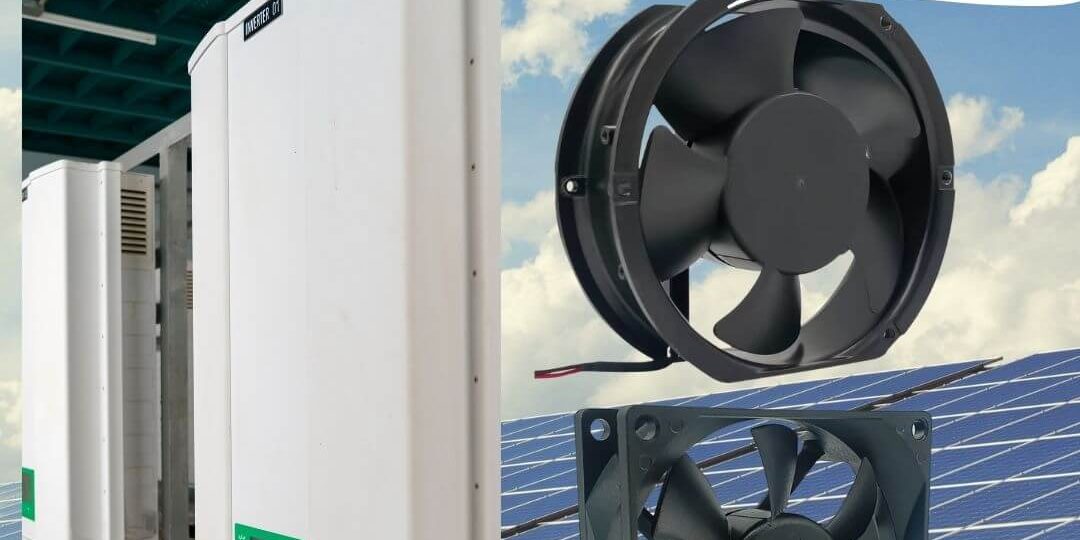 Nowadays solar power is doing more than ever to help meet energy demands for local power and for feeding power back to the electric grid, and the inverter is one of the most important pieces of equipment in solar power plants. Ventilation cooling can affect inverter efficiency, and then affect the photovoltaic power plant reliability.

What Does a Solar Inverter Do?

With the goal of carbon dioxide emissions, carbon-neutral, and “building a new power system with new energy as the main body”, as the key technology of the sustainable development strategy of renewable energy, the photovoltaic power generation industry has ushered in a leap-forward development opportunity and is gaining unprecedented development. Most countries have successively issued a series of policies to actively support the expansion of the photovoltaic industry. By the end of 2021, the installed capacity of solar power generation on the grid will reach 306 million kilowatts, breaking the 300 million kilowatt mark, and the industry has developed rapidly.

At present, the market is mainly dominated by central inverters and string inverters. The power range of central inverters is about 500kW-3MW. They are mainly used in large-scale projects such as ground solar power stations with good lighting conditions; string inverters The inverter is a 20kW-350kW, distributed inverter product type, mainly used in small and medium-sized PV power generation systems which are used for industrial, commercial, and household sectors. In recent years, the voltage of photovoltaic power plants has been developed from a 1,000V system to 1,500V. More photovoltaic modules are connected in series, which greatly reduces equipment, cable, and construction costs, and increases power generation.

The solar inverter is the essential equipment of the PV system. Its main function is to convert the DC from the PV modules into AC that is required by the grid. But in fact, the inverter is not only the inverter but also the safety housekeeper of the photovoltaic power station. The inverter also undertakes the monitoring and protection of the photovoltaic array and the power grid, as well as system-level functions such as protection of the external environment and human-computer interaction.

How To Cool Down The Solar Inverter?

In general, the allowable operating temperature rise of electronic devices is between 40-60 °C. In the case of a temperature rise of 60°C, the natural cooling can bear the maximum heat flux density of 0.05W/cm2. When the thermal flux density is larger than 0.05W/cm2, the forced air cooling method by means of a cooling fan is a good choice in terms of both cost and performance. If the thermal flux density continues to rise, other heat ventilation methods such as liquid cooling are required.

What Is The Purpose Of a Fan In Inverter?

Uninterruptible power supply (UPS) cooling fans are essential in keeping electronic components such as the inverter and rectifier cool enough to operate safely. If the internal solar inverter cooling fans don’t work properly, these components run at much higher temperatures, which makes them deteriorate far quicker.

Solar inverter cooling fans are found throughout the inverter in specific places to maintain effective component cooling. In general, the bigger the solar inverter system, the more (and bigger) cooling fans you’ll find.

How To Make The Solar Inverter Last Longer?

The inverter adopts an excellent cooling system design in terms of heat dissipation to ensure low loss and long service life of the inverter. Among them, the method of natural heat ventilation is used below 17KW, and the heat ventilation method of forced air cooling is used for 17KW and above. The solar inverter cooling fan with protection level IP68 will be used.

The solar power system’s current inverter determines the amount of AC watts that can be distributed for use, e.g. to a power grid.  Many of these large solar inverter systems have tailored cooling solutions that can differ from each other (e.g. air cooling vs. liquid cooling) but all methods have their origins in cooling electronics

For cooling the inverter, many factors need to be considered, like meteorological data, environment influence, operation room, etc. After determining the proper scheme to meet the cooling requirement, improvements should be taken to keep a better working condition,  Ventilation with cooing fans can reduce the energy cost and ensures the photovoltaic power plant reliability; it is recommended to choose this ventilation scheme.

Shenzhen Minxin Industrial Co., Ltd is an experienced compact cooling fan and blower manufacturer, whose cooling fans and blowers have been widely used for PV inverters worldwide. Our team of professional experts comes with years of experience in cooling fan manufacturing and engineering, which enable us to provide solutions for various applications.

We provide a bundle of fan cooling system solutions for your PV inverter applications, contact us if you need fast supply of cost-competitive cooling fans.