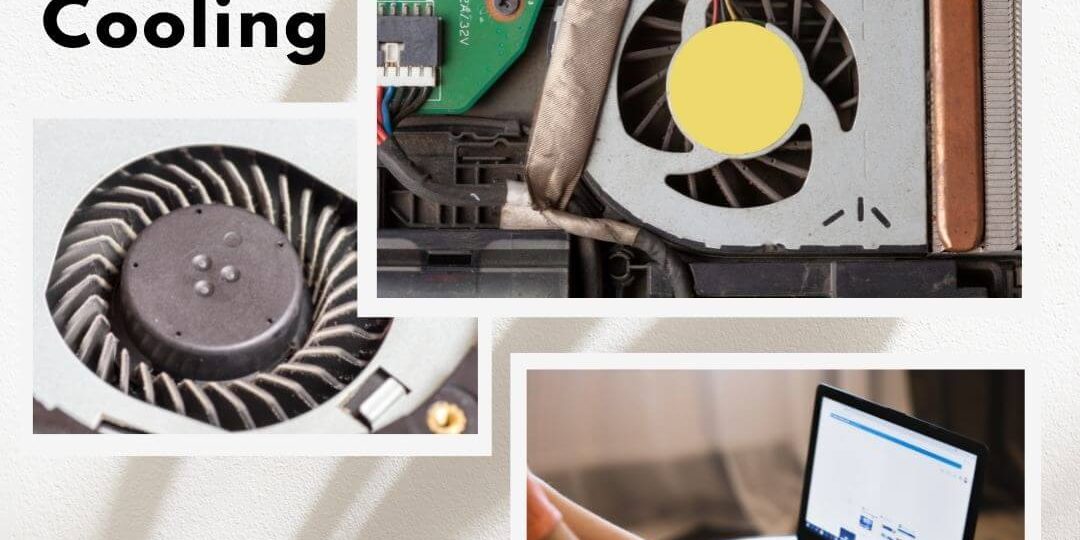 The Difference between Desktop and Laptop Cooling Systems

Therefore, the laptop CPU cooling fan often uses the turbine structure. With this turbine structure, the fan blades and the rotating surface have a vertical arrangement in an annular shape. During the Laptop operations, the air will enter the space surrounded by the annular fan blades from the axial direction, and then the air will join the centrifugal effect of the fan blade rotation. The airflow will then get thrown to the horizontal side using vortex-like movements, allowing the laptop to transfer its high temperatures from the internal systems outside.

The axial fan you can find on most desktop computers has the similar working system as a shotgun, as it dissipates high temperatures from the internals with the face-to-face heat dissipation area. Meanwhile, the turbine fan structure for Laptops has the similar working system as a sniper gun, as its heat dissipation area scatters at various points, and it’s necessary for the Laptop manufacturer to adjust its vertical direction. Then, the collected air circulation volume will get concentrated at a certain point that faces the cooling fins’ direction, so that the cooling system can move the heat out of the laptop internals. To achieve the best efficiency, the cooling system must be able to get rid of the stagnant air inside the laptop’s internal area.

An Important Note When Disassembling Your Laptop

You will find that most Laptop fans and cooling fins will have one or several pieces of black acetate cloth tape around them. These tapes are there to block the gap between the processor or GPU and the cooling system and to prevent any potential air leakage. It’s important to put the acetate cloth tapes back on again when you reassemble the Laptop. Otherwise, it will affect the efficiency of the air circulation inside the Laptop.

The Cooling System in Slim and Lightweight Laptops

It’s important to note that many slim and lightweight Laptops now use the sunk-type hinges that match best with their slim form factor. However, when you open the laptop, these sunk-type hinges will often block the air circulation in the rear area of the laptop, thus affecting the efficiency of the laptop’s heat dissipation. To avoid this problem, Laptop manufacturers will often apply the design of the air circulation area on the side of the Laptop, or they will switch to using the vertical hinges. Another option for the Laptop manufacturers is to create a path for air circulation around the base of the hinge area of the Laptop.

What are the Roles of the Cooling Fan Size and the Fan Operating Voltage?

Many Laptop cooling fans will have the 5V operating voltage, and some high-end gaming Laptops will have the powerful cooling fan for laptops that uses the 12V voltage for a better heat dissipation and air circulation on these Laptops. Gaming Laptops will also have ‘Performance Mode’ that allows the hardware to work at its fullest, and the larger voltage of 12V on their cooling fans will handle the heat dissipation better.

However, as a result, the noise problem will become apparent for these gaming laptops, as they have larger cooling fans with larger voltage that produce loud noises during heavy-duty operations. Thus, it’s better for you to use the performance mode when you wear headphones during your gaming session to eliminate the noises that come from your Laptop’s cooling fans.

The Roles of Bionic Fan Blades and Materials in Most Laptops

When we compare different Laptop models, the cooling efficiency of each Laptop will differ depending on various factors. For instance, when the size and the operating voltage of the Laptop cooling fans are the same, the number of fans, materials, and the bionic design will determine its circulating air volume, noise, and cooling efficiency. Most thin and lightweight fans will have between 50 and 60 blades, and the cooling fans in gaming Laptops will have more blades.

To find the balance between the number of blades and their spacing, the cooling fan manufacturers will often evaluate the Laptop’s airflow changes by using the industry-standard simulation software. To reduce the noise, using the bionic design is preferable for many Laptop manufacturers.

The Eagle Wing Cooling System featured on ThinkPad’s high-end models and the Blade Fast Cooling Fan System promoted by Acer’s Predator gaming laptops are using the bionic design that follows the unique feather arrangement of owl wings. Each fan blade has an uneven design, which can provide a large air circulation volume in an ultra-thin space with a thickness of less than 5mm, and the noise when running at full speed is also quiet enough. In addition, it uses all-plastic materials for the internal fan blades for a better air circulation volume.

When you replace the plastic fan blades with metal materials, it will have a larger air circulation volume under the same voltage and speed. This is something that Acer Predator gaming Laptops are using. Acer has an official statement telling the customers that their fourth-generation 3D blade fast-cooling metal fans featured in their Acer Predator gaming Laptops have a 45% higher airflow than the Laptops with the similar-sized plastic cooling fans.

However, it’s important to note that while the metal cooling fans are better in terms of heat dissipation efficiency, they are more difficult to assemble, cost more to produce, and might get damaged during long-term use. Also, the metal blade cooling system’s efficiency will get affected when there are mistakes during the fan assembly that cause the fan blades to get damaged. Therefore, many OEM manufactures will prefer using the cooling fans with plastic blades, as the plastic blades are more immune to damages during assembly, and they can maintain their shapes during long-term use.

How about the Dust Removal Aspect of the Laptop Cooling Fans?

Laptops equipped with cooling fans will always accumulate dust from time to time. The dust will accumulate because of the air circulation that will attract dust to come inside the Laptop and trap it there. Yes, the Laptop cooling fans will help keep your Laptop temperature low, but it will also attract dust to come to the insides of your Laptop, which can contribute to trapped heat when left unchecked and uncleaned. The small space around the Laptop’s internal area can also make it difficult for the dust to come out of the system.

With the potential dust accumulation in your Laptop, it becomes necessary for you to clean the dust on your Laptop’s cooling system from time to time by disassembling the Laptop and cleaning the cooling fans with a good cleaning system. Also, you might need to re-apply the silicone grease between your laptop processor and the heat sink when you reassemble your Laptop for better heat dissipation on your laptop.

ASUS is the brand that has the most experience in providing the dustproof cooling system for their Laptops. The company has introduced the cooling fans with the ANTI-DUST feature in many new ASUS gaming laptops. The ANTI-DUST cooling fans will release the dust that enters the fan circulation area, thanks to the dust removal preset that it has.

However, it might not work well in the long term, as the dust might block the cooling fins from time to time. Also, the materials used for the cooling fans will affect the heat dissipation efficiency for the Laptop even with the dustproof feature that it has, meaning that you will need to clean the dust from the cooling fans using the manual method.

How Easy is It to Clean Dust from Your Laptop Cooling Fans?

Some Laptop cooling fans use a plastic body and a metal top cover, which improve a certain heat dissipation capacity by taking advantage of the better thermal conductivity of metal materials. The detachability and the easy disassembly of the Laptop fan shell will determine whether it’s easy for cleaning and dust removal.

Also, it’s important to note that some Laptops use conjoined heat pipes, fans, and cooling fins. With this configuration, you can clean the internal fan blades at fixed points, but there will always be certain dead spots you can’t clean. The configuration of the Laptop’s cooling system will also affect the cooling efficiency of the Laptop, along with the Laptop’s performance.

Last but not least, the Laptop’s power adapter is also an important thing to consider. Many gaming laptops with the GTX 1050 Ti graphics are only using a 120W power adapter, which is often not enough to supply the full power required by the laptop’s i7 processor and the laptop’s GPU.

It’s important to note that a slim and lightweight Laptop should have an adapter with at least 65W of power, while a GTX1650 gaming Laptop will need at least 150W power adapter. Also, a GTX1660Ti or higher-grade gaming Laptops will need a power adapter with 180W-200W or even higher. By following this advice, you can buy the best performance laptop that can run at its best while keeping the temperature low.

So, aside from the hardware specs, form factors, and the cooling fans of the Laptop, you need to look for the power adapter that comes with it, as it can affect the overall performance of the Laptop.

Shenzhen Minxin Industry Co., Ltd specializes in manufacturing AC, EC and DC cooling fans and blowers. Our team of professional experts comes with years of experience in cooling fan manufacturing and engineering, which enable us to provide solutions for various applications.

We provide a bundle of solutions for your applications, contact us if you need fast supply of cost-competitive cooling fans.

Centrifugal Fans Vs Axial Fans: How to Choose? 
November 5, 2022