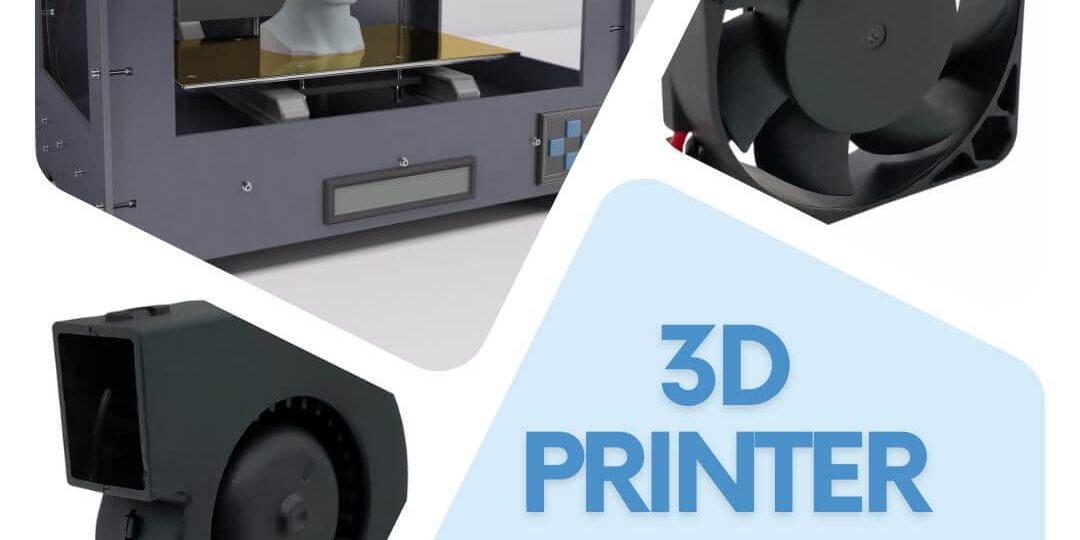 In this article you will get a picture of what a 3D printer is, how a 3D printer works, what will affect the 3D printing performance, and cooling tips for 3D printers.

What Is 3D Printing And How Does It Work?

Have you ever tried to wish something into existence?

Well we live in a world where you can practically do that now.

We’re not talking about a magical genie, we’re talking about 3D printers. 3D printing is one of the most revolutionary technologies of the 21st century, if you can think it, chances are you can print it, from 3d printed sushi to 3d printed organs.

The common material used for 3D printing is plastic, like PLA and SLA, a 3D printer works a lot like a hot glue gun that’s being operated by a robot solid material known as the filament goes in one end gets pushed through a hot nozzle that melts and is deposited in thin layers, this happens over and over until a three-dimensional object emerges. 3d printed objects can be rapidly customized and produced at much lower cost than normal production process we used before. With more and more materials can be 3D printed in the process of the technology development, now we’re 3D printing many kinds of objects, the most awesome part is organ, scientists have successfully 3d printed a mini human heart from stem cells, this heart is partially functional and is used for pharmaceutical research, there are a few challenges ahead and fully functional but the scientists are confident that in a few years this 3d printed heart will be able to function inside an animal or a human this technology could be used to create thousands of much-needed hearts for transplant surgeries.

We’re going over tuning basics and how to tune your print to get the perfect part every single time. So the next setting we’re going to look at is cooling.

How important is printing with cooling fans? Very important!

Let’s talk about why cooling is important on any 3d Printer, this is shared with a lot of other Cali printers you’ll see that there are two 3d printer cooling fans, one there’s a 40mm axial 3d printer cooling fan that is used to cool the heatsink that you’ll find on the hot end. So what that does is it make sure that you’re not getting what’s called heat creep up into that heatsink, which would cause your filament to melt prematurely. the second part and what we’re actually looking at is what’s called the part cooling fan, it is actually used just as it sounds to cool the part that you’re printing.

So certain types of thermal plastics like PLA need to be cooled quickly once they’ve been extruded out of the nozzle and what that does is it solidifies them. It makes sure that number one they hold their shape, and number two that they’re ready to receive the next layer of filament when it goes up to the next level.

So proper part cooling does 3 things for us really:

It ensures that there’s no cooling artifacts on the actual print, and make sure that you don’t see any drooping extrusions or any rough extrusions on the edges.

Good 3D printer cooling can actually make sure that you don’t need additional supports on your print, that means less removing of supports when you’re done and also potentially a better quality prep. Because you’re not going to have the support removal artifacts after you cut those off.

3. Reduces number of failures due to curling, overhangs,etc

Most importantly is it’s going to reduce the number of printing failures. So you may have seen before if you ever have improper cooling on a really steep angle. in particular, you may see that print actually starts to curl up, or that it begins to get a little rough on top what that can do is it can actually catch your nozzle, and when it catches your nozzle one of two things is going to happen, number one it may knock your part off your printer. Which of course means a failure it means starting over, or number two it actually may catch that nozzle causing one of your motors to slip, and then you have what’s called a layer shift and because of that layer shift again. You’re going to start extruding plastic where it’s not meant to be, and you’re going to have to start over. so a lot of those questions and concerns could be due to improper cooling or the printer not being able to lay down layers correctly and thus producing a print failure now.

Let’s turn to the crowding printer specifically or any printer that shares a similar design to the stock cooler from Cree ality. So as I mentioned this 40mm 3d printer cooling fan is specifically designed to cool the hot end or the heatsink, that separates the hot end from the cold in well that same 3d printer blower fan does blow a little bit onto the part due to the design of this, and they’re not being anywhere for the air floor to go, so it goes down onto the part, but that’s not the primary cooling for the part, that’s just extra, the other 3d printer cooling fan blower on the side is the one that is primarily designed to cool the part, now one of the problems with this design is there’s only a 3d printer blower fan on one side, now under most situations most prints that you’re going to find that’s probably good enough, and in my testing I found that it’s probably good enough now.

What Does A 3D printer Cooling Fan Do?

Actually having a 3d printer blower fan here is mandatory to all FDM printers as it cools down the heatsink called the cold end which prevents plastic filament from melting. Further up the printhead the hot end is the part down here which melts the plastic and is pushed through the nozzle. The reason for these two 3D printer cooling fans on either side of the nozzle is to cool down the extruded plastic as soon as possible. So the plastic can maintain its shape and support the next layer above it if the previous layer of plastic is too hot. Then it will be soft unable to support the next layer resulting in an uneven deposit and an ugly finish. Let’s test this theory by printing two calibration cubes with and without the 3d printer cooling fan activated.

Another case previously I printed is the Marvin keychain. I didn’t use the 3d printer silent fan here. This time I’ll print this exact same Marvin piece without the 3d printer cooling fan activated, let’s see what happens.

The entire part was still in a kind of soft molten state with each layer being deposited on top hand, it shows in the finish all the detail of this part has been kind of mashed together. It’s lost its nice smooth surface, there’s a lot of overlapping layers, it looks like it’s not a pretty finish.

So this is what happens with PLA plastic without the 3d printer cooling fan, PLA has a glass transition temperature of approximately 55 degrees Celsius, so the 3d printer blower fan assist in cooling down the plastic to that 55 degree mark before the next layer gets deposited, that will result in a nice even detailed finish, but what about if we try to print this in ABS?

Plastic ABS has a glass transition temperature somewhere between 90℃ and 100℃. That means the plastic doesn’t need to be cooled down quite as far as PLA to maintain its shape and its rigidity. But ABS can still be succumb to this particular feature where if it’s still quite molten, especially with using the heat bed. How the result will be? Virtually the same as the one here. So even though we shouldn’t be using 3d printer cooling fan or it’s least not recommended to use 3d printer cooling fan with ABS, because ABS tends to shrink when it’s cooled resulting in the part popping off the bed. This particular piece doesn’t have a lot of adhesion to the bed or it’s not a long piece. So I think we can get away with turning on the 3d printer silent cooling fan with ABS plastic.

So the next test I printed Marven once again with the black glossy ABS plastic I enabled the cooling fans but only up to 50% speed, I was printing this blue one at 100% speed because we don’t need to cool the ABS down to that 55 degree mark like with PLA, we only need to cool it down to about 90 degrees. So will ABS result in a finish like this? let’s find out.

And here it is Marvin once again this time printed in black AVS plastic, and you’ll notice it is printed absolutely perfectly there. There is no distortion from any overlapping filament, the filament was rigid while it was printing as you saw, and all the features of this Marvin piece have come out just fine. In fact, if I bring over the PLA Marvin which printed just fine, they’re virtually identical in their finish. So depending on the piece that you’re printing in ABS it’s not totally forbidden to use the the cooling fans especially for detailed pieces or at least small pieces like this this Marvin keychain.

So if you don’t have 3d printer cooling fans on either side of your hot end blowing on the at least PLA plastic you’re missing out on a lot of printed part quality. Just by not having them on or active well.

Choosing the Suitable Cooling Fans for the 3D Printers

Shenzhen Minxin Industrial Co., Ltd is an experienced compact cooling fan and blower manufacturer, whose cooling fans and blowers have been widely used for 3D printers worldwide. Our team of professional experts comes with years of experience in cooling fan manufacturing and engineering, which enable us to provide solutions for various applications.

We provide a bundle of fan cooling system solutions for your 3D printer applications, contact us if you need fast supply of cost-competitive cooling fans.